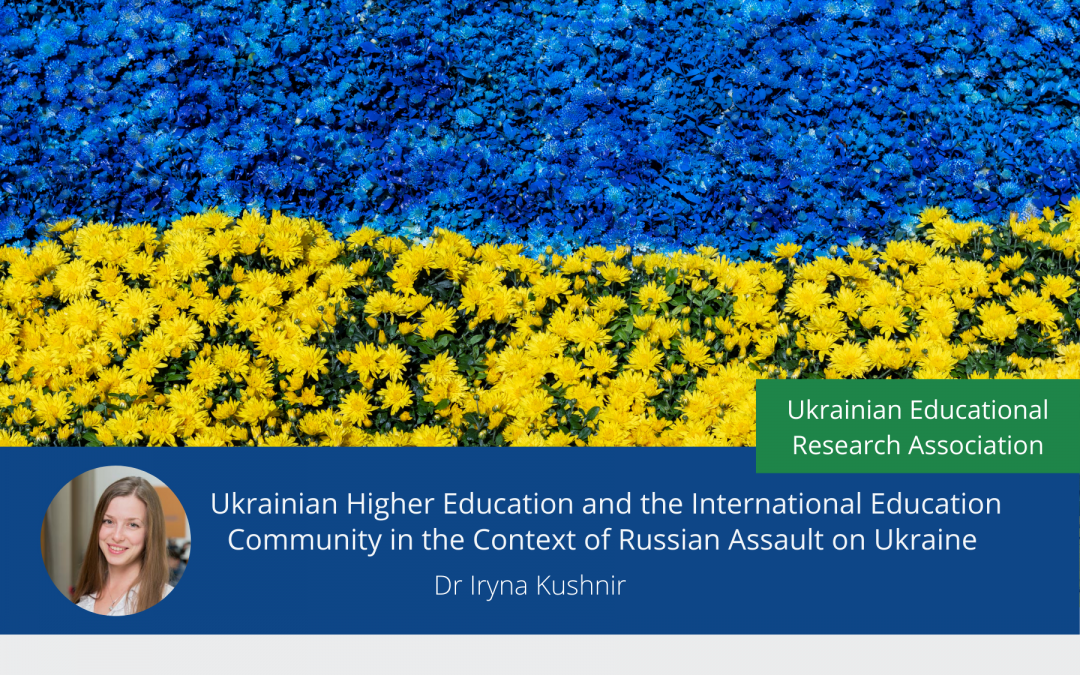 On the 24th of February 2022, the world witnessed the most unexpected and unbelievable turn of events – a full-scale war in a country located in geographical Europe. Russian government and military, in cooperation with their partners in Belarus, launched a military assault on Ukraine’s infrastructure, civilians’ lives, freedoms, and sovereignty. Higher education (HE), along with other areas of life, has taken a backstage while people have been sheltering and/or fleeing to seek safety. Nevertheless, the backstage for Ukrainian wounded HE in these circumstances does not mean a full submergence by the war.

The number of damaged or destroyed educational establishments, including higher education institutions (HEIs), has been growing. Ukrainian academics and students are among those feeling the country seeking safety. Some students still hope there will be a chance to come back to their studies in Ukraine. Other members of the HE student community in Ukraine are staying, putting on a soldier’s uniform, and fighting for Ukraine. Some still manage to continue with their studies in various formats in the regions less affected by the war after the initial impact, as the Ukrainian government supports HEIs in ensuing uninterrupted payment of academics’ salaries.

The Ukrainian government and other HE stakeholders in Ukraine have been developing ways to support Ukrainian HE. For instance, on the 12th of March 2022, the Ukrainian Rectors’ Union supported the initiative of the Ukrainian Ministry of Education and Science: to cancel the requirement for final year upper-secondary school students to pass the final exams (State Final Attestation) as well as the External Education Assessment previously used to determine university entrance; to simplify the rules for applying for master’s degrees in 2022 and cancelling the final exam ‘Krok’ at medical universities; to give the right to HEIs to set the amount of tuition fees; to request that the government of Ukraine increases the number of students by 30% whose fees would be waived for 2022 start, particularly for prospective students from the most affected regions of Ukraine; to appeal to all universities to donate one day’s pro-rata salary of academics to supporting Ukrainian soldiers, etc.

Such measures are being actively discussed and further solutions are being negotiated at multiple meetings with various Ukrainian stakeholders and international guests. An example is the online Open Consultation on the 16th of May 2022 with presenters such as the rector from a Ukrainian university, the leader of the non-governmental organisation ‘Emotional Intelligence Institute’, the director of the Ukrainian Start-up Fund, and an Association Professor from Lithuania.

Ukrainian HEIs have received a lot of support from the international community that has been watching the impact of the war on Ukraine, including its HE sector. For example, following the bombing of Karazin University in Kharkiv in Ukraine on the 2nd of March 2022, universities from other countries (e.g., Austria, Italy, Spain, Cyprus, Slovakia, Latvia, Poland, Romania, Senegal, and Turkey) sent their letters of support to Karazin University, condemning Russia’s aggression.

In another example, the Estonian University of Tartu has generously offered mental health support to Ukrainian academics as well as support with applications for studies and academic jobs for Ukrainians. Similarly, Polish National Agency for Academic Exchanges (NAWA) has launched a program of support for Ukrainian undergraduate and postgraduate students to continue their studies in Poland free of charge between March and September 2022. Comparable conditions have been guaranteed to 51 Ukrainian researchers who are going to continue their work in Poland, supported by the Polish National Research Centre. These are a handful of examples to illustrate the measures that have been so generously developed by other countries to support the Ukrainian higher education community.

Such developments have been an expected chain reaction to other important milestones in the changing geopolitics of the international HE space. Early examples include:  the announcement of the European Commission on the 3rd of March 2022 about ceasing its cooperation with Russian entities in the area of education and research; on the 7th of March, Quacquarelli Symonds announced the plan to exclude Russian and Belarus HEIs from international university rankings; subsequently, the European Association for Quality Assurance in HE (ENQA) Board issued a statement on the 8th of March 2022 in response to the war about suspending the rights of their member and affiliate agencies in Russia. Organisations of different executive power in Ukraine and HEIs have also been actively pursuing justice in the face of the brute force of the invaders, holding consultations with multiple international organisations regarding breaking the ties with the aggressors in the area of HE. A couple of examples include appealing to the international-level coordinators of the European Education Research Association and the European Higher Education Area.

An appeal was made by the Ukrainian Education Research Association – the biggest and most influential national-level research organisation in Ukraine. It issued an open letter with a request for action to its sister organisations in the European Education Research Association (EERA) on the 4th of March 2022, following  EERA’s timely statement about condemning the war. In response, on the 13th of April 2022, EERA unanimously and unequivocally denounced the invasion of Ukraine, and announced a few generous ways of supporting educational research in Ukraine, such as cancelling the need for Ukraine to pay EERA membership fees, granting free entry to all Ukrainian researchers to the conferences organised by EERA, committing to continue working to develop funding opportunities for Ukrainian researchers, and more.

In another example, the Minister of Education and Science of Ukraine addressed the international Bologna Follow-up Group which coordinates the work of the European Higher Education Area on the 1st of March 2022 with a request for them to lobby for justice and break ties with Russia. A similar letter followed from the Ukrainian Education Research Association on the 28th of March 2022. European countries were divided in whether to break the ties with Russia in the area of research and education, including HE. This was because academic cooperation was still seen by some as a potential tool to save the lost diplomacy with Russia and override the disinformation campaign within the Russian borders. However, these optimistic voices were set aback by the statement made by Russia’s Rectors’ Union in early March, which openly supported Russia’s propaganda which masks the war under the disguise of ‘a special military operation’. In this statement, Russia’s Rectors’ Union maintains: ‘This is Russia’s decision to finally end the eight-year confrontation between Ukraine and Donbas, achieve the demilitarisation and denazification of Ukraine, and thereby protect itself from growing military threats’. This disgrace on behalf of Russian rectors is disheartening.

This could not have gone unnoticed by the international Bologna Follow-up Group which met on the 11-12th of April 2022 and issued a statement about suspending the memberships of Russia and Belarus in the European Higher Education Area. This membership suspension did not mean, however, burning all the bridges with Russia and Belarus since Bologna Follow-up Group has asked in the statement everyone affiliated with the EHEA to offer support and protection to those actively condemning the war at their own risk.

This description of the examples above of the apparent shift in the international geopolitics of HE and the national-level adjustments to the war in the Ukrainian HE sector suggests the onset of long-term changes and subsequent consequences for the structure of the Ukrainian HE, the HE of the countries that are hosting representatives of the Ukrainian HE community and helping them in other ways, and consequences for international cooperation in HE more broadly. These changes are emerging as an area which calls for academics to advocate for democracy and be at the forefront of the (re)production of knowledge and truth about HE in the dynamic context of the war.

Research into this area is needed for evidence-based policy-making to support the Herculean task of the Ukrainian HE community to handle the situation and preserve its identity. It is also essential for developing further the so-called ‘protective factors’ currently in place, illustrated above, such as the generous support of other countries and external organisations, policy adjustments both in Ukraine and abroad, and technological opportunities connecting people and enabling communication and joint decisions. Pathways should also be explored for mitigating possible risks resulting from the developments, such as a potential brain drain in Ukraine, the marginalisation of those from Ukraine who do not receive support or those abroad who cannot benefit from the opportunities that have now been channelled to tackle the consequences of the war, and the difficulty of promoting democracy through HE in the world which the war has changed.

There has been an apparent shift in the international geopolitics of HE and the national-level adjustments to the war in the Ukrainian HE sector.

These changes are emerging as an area which calls for academics to advocate for democracy and be at the forefront of the (re)production of knowledge and truth about HE in the dynamic context of the war. 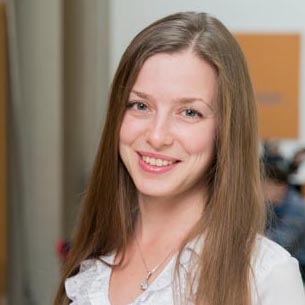 Dr Kushnir’s interdisciplinary research interests combine the following main areas: higher education, education policy, European integration, post-Soviet transition and migration. Her interdisciplinary approach has led to empirical and theoretical contributions, which reveal how education policy on the one hand and Europeanisation processes and post-Soviet transition on the other hand are interrelated and mutually shape one another.